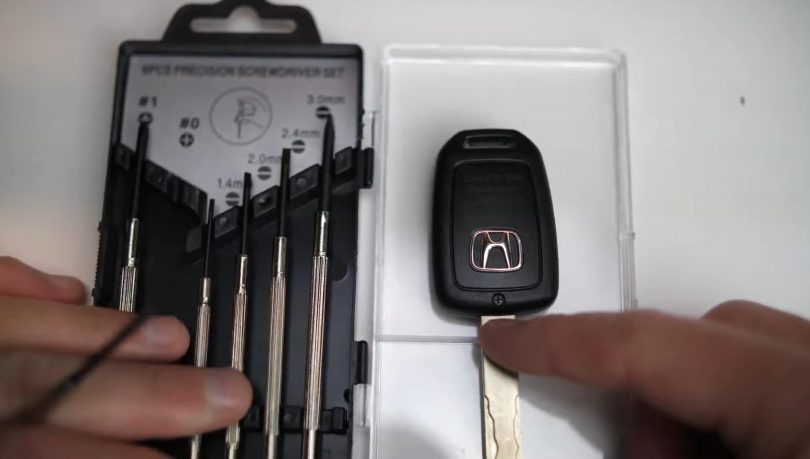 A short lived life, the Honda Crosstour only had one key used during its model run. The physical smart key with rectangle buttons. It looks like this:

The Honda Crosstour key fob has a bit of a challenging key battery to replace. You’ll first need a small screwdriver, and not like the small one you have in your toolset. You’ll need a precision set, or a jeweler’s set.

Previously branded as Accord Crosstour, Honda Crosstour was a mid-sized wagon from the Japanese auto manufacturer that went into production in November 2009. The first model of the Crosstour was the 2010 model, which went in production for five years before the automaker discontinued its production in 2015. The model is available in two generations.

Compared to the Accord, the Crosstour notably featured more ground clearance. It also had a fastback-style rear end and a unique interior. The first generation of the Crosstour was available in three engine models that had different engine capacities. An automatic transmission was standard for all the models. If you own a Honda Accord and need to change its battery, we also have an article about its key replacement, read here.

The 2.4 L engine, for instance, was paired with the five-speed automatic transmission to deliver a horsepower of 192. The manufacturer also offered a 3.5 L V6 engine as a four-wheel-drive, a combination that achieved a power output of 271 HP. The other model was a 3.5 L V6 engine that entered the market as an all-wheel-drive. Like the 4WD, it delivered 271 HP in power output.

In 2013, Honda gave the Crosstour a significant facelift that featured aesthetic styling and improved interior designs. The new Crosstour also featured a powerful V6 engine that the manufacturer retained from its predecessor. The 2.4 L engine couples with a five-speed auto transmission and front-wheel-drive to deliver 192 HP and a torque of 162 lb-ft at 4400.

The 2.4 L engine offers a fuel economy of 31 mpg on the highway, 23 mpg in city driving, and a combined efficiency of 25 mpg. The all-wheel-drive comes with a five-speed auto transmission to achieve a horsepower of 189 HP. The 2013 model also featured 17-inch alloy wheels and automatic air conditioning. It also came fitted with an enhanced infotainment system that composed of a 360-watt audio system that comes with seven speakers.

Other features included a cruise control, a USB interface, an auto-dimming rearview mirror, and a removable utility box. You can get more luggage space by folding the rear seats that fold on a 60-40 split. The primary safety feature in the Crosstour is its Advanced Compatibility Engineering body structure that improves vehicle stability.

Other safety features include anti-lock brakes with electronic brake distribution, vehicle stability assist, dual-stage front airbags, and the side curtain airbags that feature rollover sensors. Although the vehicle was discontinued due to its poor sales in 2015, the Crosstour was a genuine crossover that buyers would get as either an all-wheel-drive or front-wheel-drive. Many people, however, felt that the model’s interior designs were not at par with its technical prowess.

In this part of our article, we will show you how to change the battery key for a Honda Crosstour. This car was only made from 2013 to 2015, but you may have a key which has got some rectangle buttons.

Flip the key over and you will see a small Philips screwdriver in the back. First thing you’re gonna need is really small screwdriver as we’ve mentioned in the first paragraphs of our article.

Take the smallest screwdriver and you’re really gonna have to dig in to get that screw out. Once you’ve got the key out, if you look at the right/left side of the Honda Crosstour key fob, you can see a little notch right there.

Take a flathead screwdriver, insert that right into the notch and then if you just twist, you can start to get some leverage to snap off. The back piece of the key contains the battery that you need to change. Take the flathead screwdriver and pop out the key battery, and put the new one back in and gather the Honda Crosstour key fob back to use again.