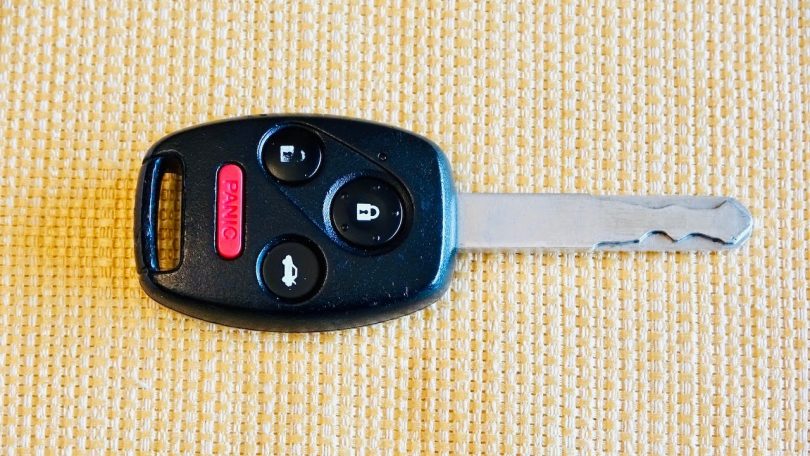 In this guide, we are going to explain you how to change the battery in a Honda Accord key Fob, and there’s a really quick way to do this. So, on the back of the Fob, there’s a little knob. You can see it’s kind of centered right there on front of the Honda Accord key fob.

That’s how to get access to the CR 2032 little coin battery. You can just pop this out again using the valet key, and when you put a new one in, just make sure that the lettering is towards you. That’s positive side and just pop one back in to put this back together. Just put it, pop it, valid key back in and it’s done.

That’s how we changed the battery on the Honda Accord, and this key Fob was used from 2013 till present.

The Accord key battery with the physical key is a little bit challenging to replace. You’ll need a precision screwdriver set, and some patience getting the first small screw out.

So, in this part of our article, we are going to show you how to change the battery in a Honda Accord key Fob, and the first thing that you’re going to need is one of these precision screwdriver sets. Because on the back of the Honda Accord key fob, you’ll see be a very small Phillips type screw and you’re going to need the smallest screwdriver to be able to unscrew the key, and that’s the first step we need to do to change the battery.

This is for model years of the Honda Accord 2013 to 2017. So, the first thing, unscrew it. This will be a lot more difficult the first time you do it.

You really have to push down hard. Depending on how stripped that screw is too, could be even more difficult. So once we get this screw off, there’s a spot on ther right/left side of the key. You can see there’s a little slot. Go ahead and take another one of the flathead screwdrivers from your little precision set.

So, put it in just the side there and you can get some leverage, and you can start to twist, twist and get the two pieces of the key apart. So you can see now the battery’s negative side is up, and so to get the battery out, you can just take your small little flathead pop that battery out.

Now you can see it’s a CR 1620. It’s a really small coin battery. So make sure when you put a new one back in that the positive side is down so that any lettering should be facing away from you when you put this back in. One kind of key is if you push in the top side here first, everything will slide in a lot easier. Now we’ve got a new battery in.

Go ahead and resnap together the two pieces and then snap together pretty easily, and then go ahead, put your tiny little screw back in like so and screw that back in. So, that’s how you change the battery on a Honda Accord 2013 – 2017.

In this part, we are going to show you how to change the key battery for a Honda Accord key fob. This is an older key used from 2003 to 2012 models. So you’ll need a screwdriver set. We’re probably going to need something like this because if you look on the back of the Honda Accord key fob, there’s a really small screw that this is the first step that we need to do to change. So already kind of loosened it, but it might be a little tight at first.

Take the very smallest screwdriver in your screwdriver set. So, once you get the screw out, go ahead and just put it aside.

If we look at the very left there’s a little notch kind of at the base of the middle of the key here. What we can do is take a small flat head screwdrivers and in that notch, put the flathead in there and then just give it a little twist, and that will start to separate the two pieces. They’re really only attached to this top point up here. So actually, once you separate it, it’ll come apart really easily.

You’ll see, there’s a little notch up there actually kind of attaches. So when we put that back together, just kind of notice this top notch there. We’ll come back to that. Once we’ve got access to the internal part here, let us just pull the main section out and then you can see where the buttons are and everything.

So, this main section kind of flip it around a bit. If you look at the bottom there, there’s again, kind of a little notch in the corner, and you can take set this aside for now. You can take your flathead screwdriver again and just put it in there and kind of twist. That will give you access to the battery that we need to change. So, when changing the battery even again, just use a little flat head screwdriver.

Pop out the 1616 batteries in here, and actually, if you kind of see the orientation we are at, the best spot to get it out is this right side right there. That will pop it right out, and the battery that you need for this cord Fob, the CR 1616 three volt battery, it’s really small. When you get a new one, just make sure and place the new one in with the positive side away from you so that there shouldn’t be any lighting or anything that faces you when you put it back in.

When you’re putting this back in, there’s kind of some bigger notches towards these little metal prongs. So, you can get underneath those first and then kind of press it in, it’ll snap into place. Then, just go ahead and re-put together the main section there.

Make sure you get the orientation all correct and all that jazz there’s the battery and that will just snap together fairly easily.

Now we’ve got the buttons you can kind of see bring our key back into view and see where the buttons will go, and then we’re just going to place the main center section back into the key snapping in a little bit. So when we’re re-putting this together to make sure that Ridge connects and then this will snap together really easily and then just go ahead and put the main screw back in and that’s it.

That’s how you change the battery for a Honda Accord older models from 2003 – 2012. Also, if you have a dead Honda Odyssey key fob battery and want to change it, you can read our article here.

The Accord has won many awards over the years including car of the year in Japan, South Africa and Canada. The car has appeared on Car and Driver‘s 10 Best list 30 times.

The Honda Accord Key Fob Today

Millions of drivers have owned the Accord over its lifespan. If you’re one of those drivers, you can know you’re on reliable, well-covered ground. From fuel efficiency and affordability to style and comfort, this car has been made for over forty years for good reason.